Sunny and warm conditions are expected today with the chance of showers and thunderstorms this afternoon.  Loose wet and wet slab avalanche problems will continue to be a concern.  MODERATE avalanche danger will exist as rapid daytime warming occurs.

Cooler air temperatures overnight will allow for a better refreeze of the snow surface than yesterday.  Full sun this morning with rapid warming will again allow the snow surface crust to melt and become wet and punchy into the mid-day.  Loose wet avalanches will become possible on all aspects and elevations as the snow surface becomes wet and loses strength.  Any rain showers this afternoon could increase loose wet activity.  Avalanches large enough to injure or bury a backcountry user are possible today.

Avoid steep terrain in areas where the surface crust is no longer supportable.  E-SE-S aspects will melt the quickest, followed by varied rates on SW-W-NW-N-NE aspects.   Timing will be important before snow conditions deteriorate.

Timing and terrain choices can help to limit exposure to these wet slab avalanches.  Get an early start!  Avoid deep wet snow and steep terrain later in the day as the snowpack loses supportability. 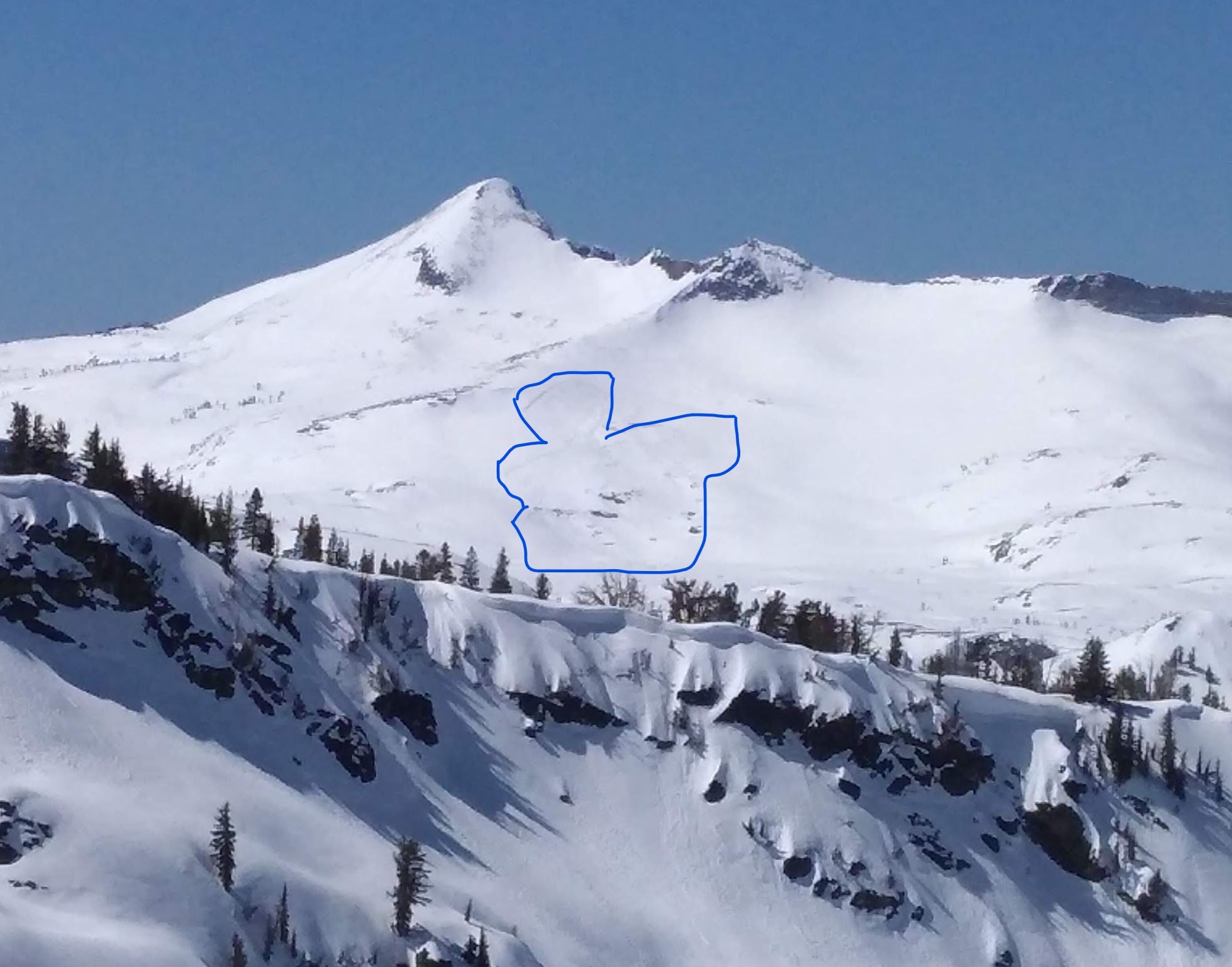 A large natural wet slab avalanche was reported from Desolation Wilderness, thought to have occurred sometime on Sunday.  This avalanche was on a NE aspect, mid-slope, with wide propagation.  It occurred off of the ridge between Pyramid Peak and Mt. Price.

Observations from Mt. Tallac showed a poor overnight refreeze.  Soft snow conditions existed by mid-morning on areas with direct sun.  By 11:30am, mostly wet snow existed at all elevations with some occasional firm snow in shaded locations.  Monitoring the March 24 buried surface layer showed that this layer has been thoroughly wetted and did not respond to snowpack tests.

Cooler air has moved into our region with unsettled weather expected through the weekend.  Overnight temperatures were near or slightly above freezing along the Sierra Crest, cooler than the previous night.  Winds have shifted to the NE, and are forecasted to remain light with some moderate gusts at the upper elevations.  Temperatures today will be near seasonal norms, but cooler than yesterday.  Full sun this morning with increasing clouds today and Friday could bring some light showers and potential thunderstorms in the afternoon hours.  Snow levels are expected to be around 8000' with little accumulation.  Additional chances for precipitation remain for the weekend and on Sunday night into Monday.