Unstable conditions are persisting, longer than what often occurs in this region. Trigging a large avalanche remains possible, especially near treeline and below treeline. Additionally, small unstable slabs of wind drifted snow may exist above treeline and near treeline. MODERATE avalanche danger exists at all elevations. This is not the time to try and outsmart the snowpack. Stick with mellow terrain for now, waiting patiently for the right set of conditions to move into bigger, steeper terrain at another time.

Instability associated with a persistent slab avalanche problem is just that - persistent. While snowpack data suggests that instability associated with this problem is decreasing, instability is still very much present and widespread. Continue to exercise caution. Conservative, lower angle terrain choices remain the way to go. Shaded sub 30 degree angle slopes still hold plenty of fun snow for recreation. Don't get frustrated with the conditions and push the limits. Act like a pro and work within the appropriate confines of the day. This is not the time to go big or to try and outsmart the snowpack.

This avalanche problem is widespread near treeline and below treeline and in isolated areas above treeline on W-NW-N-NE-E aspects. A slab of around 1 foot+ of recent new snow sits on top of a weak layer of sugary, faceted snow (Dec 11 PWL). Cracking, whumpfing (audible snowpack collapse), or snowpit tests can provide clues to the presence of instability. Sometimes triggering a large avalanche is the first and only clue to instability you get. This is not an easy avalanche problem to manage in avalanche terrain. Conversely, by limiting exposure to avalanche terrain by using only sub 30 degree angle slopes without steeper connected slopes above or to the side this becomes an easy avalanche problem to manage. The choice is yours.

Recent SW to W ridgetop wind has drifted small amounts of snow above treeline and near treeline. Small unstable wind slabs could be encountered in these areas on NW-N-NE-E-SE aspects. Slopes below or adjacent to cornice features and/or pillows of wind drifted snow are the most suspect. Move around these areas with caution.

* Two potential persistent slab avalanches have been reported since Dec 14, but the weak layer in both instances is unverified. One avalanche occurred Dec 14 on the N side of Castle Peak on a NE aspect at 8,200-8,400' at size D2. The other avalanche was reported yesterday south of Carson Pass (exact occurrence day/time unknown) in small terrain somewhere between The Nipple and Blue Lakes Rd on an N to NE aspect at around 8,200'.

* Unstable snowpit test results and audible snowpack collapse (whumpfing) continue to occur daily on the Dec 11 persistent weak layer of faceted snow. Snowpit tests are showing increasing amounts of mixed clearly unstable vs non-propagating failure results. Collapses are reduced in frequency and do not propagate as far as compared to the start of this week.

* Small wind slabs were observed yesterday at and above treeline. 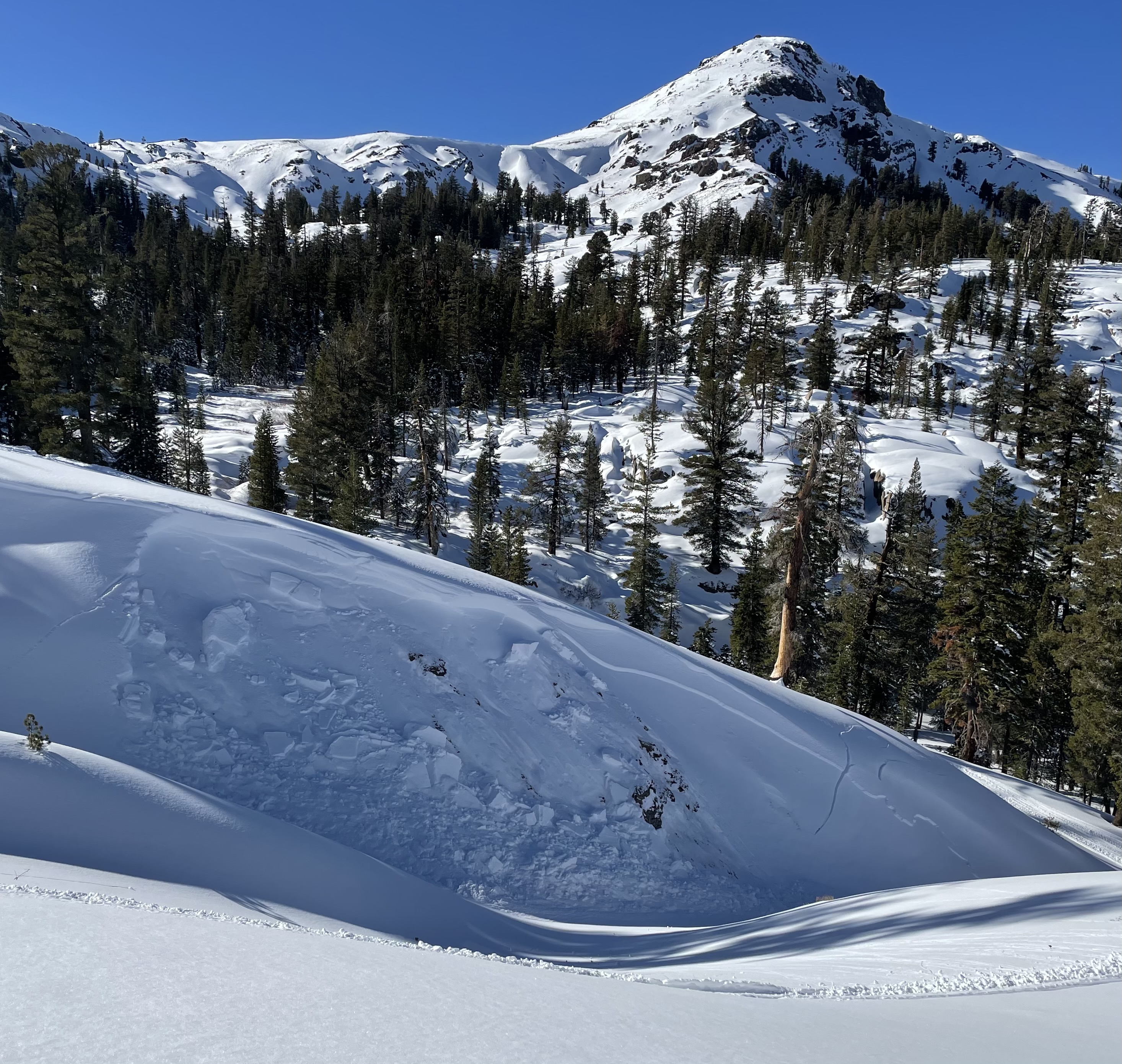 Reported yesterday from south of Carson Pass. Unverified weak layer but this has the signature of a persistent slab avalanche. Shallow wind slab crown on looker's right half likely stepped down to deeper faceted snow on the left side. Long fractures in the snow on the far right side likely go down to faceted snow (Dec 11 PWL).