Early season conditions exist across the forecast region with a shallow snowpack and many rocks, bushes, and trees present.  Human triggered avalanches remain possible today with wind slab and persistent slab avalanche problems at all elevations.  Look for unstable snow on specific terrain features and use cautious travel protocols due to low snow conditions.

Look for blowing snow, cornice formation, wind pillows, and evidence of previous wind loading from yesterday.  Dense heavy snow over less dense snow and any snow surface cracking could be indications of unstable snow.  Areas below cornices and wind features will be of concern today.

Weak snow formed during cold conditions after our first snow of the season in early November.  This weak snow now sits near the base of our snowpack with 1-3 feet of snow from 2 additional storm cycles on top.  This persistent slab showed weakness yesterday in the Mt. Rose area with a slope fracturing remotely and numerous whumping noises throughout the area.  We have found this layer to be weak above around 8300', in below and near treeline terrain on NW-N-NE aspects and has shown to be weaker at upper elevations.

This weak layer does not exist everywhere and numerous anchors ( rocks, bushes, trees) are helping to break up this weak layer across slopes and help hold it in place in some areas.  Previous NE/E winds have scoured away much of this weak layer in wind exposed terrain.  Whumping noises, cracking, or recent avalanches would indicate unstable snow in the immediate area.  With this persistent slab, remote triggering, mid slope avalanches, and the potential for avalanches occurring even after multiple users have tracks on a slope, are all possible.  An avalanche associated with this weak layer would have high consequences of hitting numerous exposed obstacles.

A slope fractured on Relay Peak in the Mt. Rose area failing on the Nov 13 facet layer.  Numerous whumping sounds and cracking were also encountered throughout this area.  Small wind slabs were reactive in near treeline terrain on small test slopes with up to intense snow transport observed along exposed ridges.

Observations from Grouse Rock in Ward Canyon had snow levels around 7500', with dense heavy storm snow and moderate to intense wind transport.

Weak snow developed between the Nov 7 and the Nov 13 storm cycles and is buried around 4-8'' above ground level.  This snow is weakest on NW-N-NE aspects above around 8300' on below and near treeline terrain that was not previously wind scoured by NE/E winds. 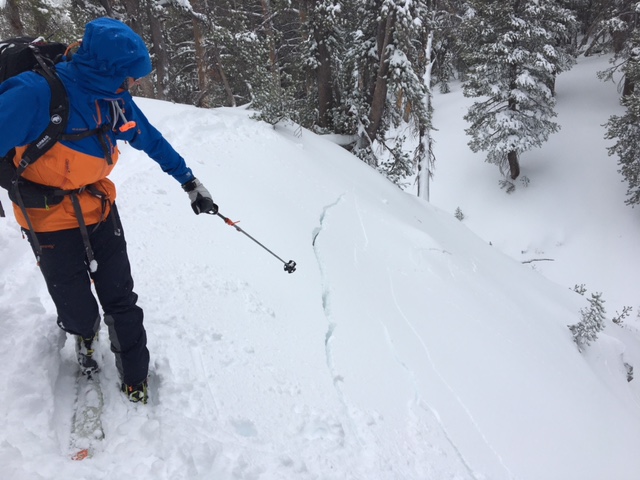 Slope fracture on small terrain above creekbed, failing on the Nov 13 facet layer.

15 to 26'' of storm snow was reported above 8000' since Tuesday evening with a snow/rain mix and decreased snowfall below 7500'.  Partly sunny with increasing cloudy skies are forecasted today with continued strong SW winds decreasing  this afternoon.  A break in the storm activity will occur over the next few days with the chance of some smaller storms for our area next week.